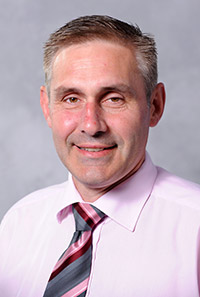 Paddy Larkin has been appointed Chief Executive Officer of Mutual Energy, with effect from 1st January 2010. He joined what was then Northern Ireland Energy Holdings in 2007 as an executive director and managing director for the Moyle Interconnector.

After studying mechanical engineering at Queen’s University Belfast, he started work with NIE at Ballylumford power station in 1991 just before privatisation. In 1992 British Gas bought Ballylumford Power station and Paddy continued to work with Premier Power, initially in breakdown maintenance before moving to the business side of the operation where he helped to oversee the change in practices from a nationalised to a private company. Later he was involved in the buy out of the long term contracts and construction of the combined cycle gas turbine and served as the station’s Chief Executive.