The completion of the main construction phase of the ‘Gas to the West’ pipeline, bringing natural gas to major towns in the western area of Northern Ireland, has been announced at an event held to thank the local community, business partners and stakeholders who have supported the successful delivery of the project.

Representing an investment of over £250million, the ‘Gas to the West’ project is being delivered in partnership between SGN Natural Gas and Mutual Energy and has the potential to meet the energy needs of up to 40,000 homes and businesses across Counties Fermanagh, Tyrone and Derry~Londonderry.

Approximately 500 jobs were created during the construction phase which was applauded for its technical innovation including traversing almost 50 river crossings and significant roads including the M1 motorway.

The recent delivery of the network to the gateways of all the target towns is a major milestone for what is widely regarded as one of the most significant energy infrastructure projects across the province in a generation. It is anticipated that when fully completed, almost 600kms of pipeline will be in the ground in the wider network area.

Economy Minister Diane Dodds has welcomed provision of the new gas infrastructure. She said: “I would like to congratulate Mutual Energy and SGN Natural Gas, and their contractors, on their success in delivering this significant energy project. The project has been supported with grant funding up to £31.6 million administered by the Department for the Economy.”

“I look forward to the continued roll-out of new gas distribution networks in each of the eight towns in the West, eventually providing some 40,000 business and domestic consumers with additional fuel choice and increasing the potential for businesses, the public sector and households to use a cleaner, more efficient fuel.”

Speaking at the event held in Dungannon on Thursday to showcase the project in the heart of the new network area, SGN Natural Gas Director, Danny O’Malley said there was “exceptional demand” for natural gas and he looked forward to the future growth of the network.

He said: “The project originated from a need to offer an alternative energy choice to consumers in the west who have been heavily reliant on solid fuel and oil. As natural gas is the cleanest fossil fuel available, it can help to reduce greenhouse gas emissions as well as offer a more efficient fuel option to businesses, the public sector and domestic consumers.”

“By enabling businesses to drive efficiency savings, we can potentially help them to be more competitive in both local and global markets. Converting to natural gas will allow businesses to reduce their carbon emissions, significantly reducing their footprint on the environment.”

Paddy Larkin, Chief Executive of Mutual Energy which owns and operates the new high-pressure pipeline into the west, said the project was already making a real difference to consumers and the local economy: “This is a major, complex, and strategic project which required a diverse range of skills and engineering techniques and has ultimately delivered the most efficient and cost-effective solution for gas consumers and the wider community in the western area of Northern Ireland. We are delighted that the benefits of natural gas are now for the first time available to businesses and homes in the Gas to the West area and we look forward to many more customers connecting and using clean, convenient and competitive natural gas in the years to come.”

“The new gas network also can play an integral role in the future decarbonisation agenda and minimising the environmental impact. Natural gas is already the cleanest fossil fuel so a switch to natural gas itself brings major cost-effective environmental benefits. In the future the network can also be used to transport the growing quantities of renewable gases to allow for further progress on decarbonisation.”

Trevor Lockhart, CBI NI Vice-Chair and Group Chief Executive at Fane Valley – which includes some of the key industrial connections to the network – was a guest speaker at the event which took place in Dungannon Omniplex.

Welcoming the project as a significant boost for the local economy, Mr Lockhart said:

“The benefits of this project for business competitiveness are sizeable in terms of driving energy efficiencies and reducing carbon emissions from where they once were. This type of infrastructure can also be used in the future for solutions which enable even greater emissions reductions, such as hydrogen. Many CBI members, including some of Northern Ireland’s major manufacturers located in the western area, are demonstrating their confidence in the new infrastructure by converting to natural gas. Realising these economic and environmental benefits will underpin the growth ambitions of these companies and contribute to the prosperity of these regions.”

Jenny Pyper, Chief Executive of the Utility Regulator, welcomed the delivery of ‘Gas to the West’ by Mutual Energy and SGN Natural Gas and the ongoing roll-out of the SGN Natural Gas network in the western area. She said: “During the past decade, we have approved three-quarters of a billion pounds of investment in our gas industry. More consumers than ever can now choose natural gas which provides an affordable, cleaner and convenient form of energy.” 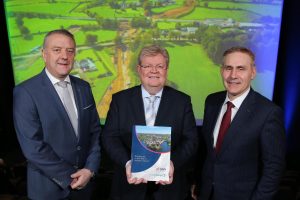 Photos from the Gas to the West celebration event will be circulated by Press Eye photography shortly after 1pm. If you do not receive images, have a media query or would like to organise an interview regarding the Gas to the West project, please contact:

This entry was posted in News, Press releases, Uncategorised. Bookmark the permalink.