The first phase of the major ‘Gas to the West’ project – which brings natural gas to most of the main towns in the West of Northern Ireland – has just reached completion. Gas is now flowing beyond Derry/Londonderry to the Strabane area and it is expected the first customers will be announced in the very near future.

Project promoters SGN Natural Gas and Mutual Energy Ltd have signalled the 30km gas pipeline from Maydown to Strabane has been completed with the final section between Artigarvan and Strabane being prepared for commissioning in the coming weeks. This pipeline, which was constructed by contractors McNicholas, connects to the Gas Networks Ireland pipeline network at Maydown just outside Derry/Londonderry following the construction and completion of a new pressure reduction facility.

The facility, which was constructed by contractors Murphy International is the first of several Above Ground Installations which will connect the towns along the Gas to the West route to the new natural gas network.

“Following the successful construction of our Maydown gas facility and the new 30km pipeline running to Strabane, I’m delighted to report gas is now flowing freely through the pipeline and into the Strabane area. This means over the coming months homes and businesses across the town will for the first time have access to natural gas through a national network. I’d like to thank all the stakeholders who have helped us get to this historic point and congratulate the engineering teams on delivering this important phase of our ambitious project which, when complete, will greatly benefit the whole region.”

“We are very pleased the benefits of natural gas can soon be made available to industrial, commercial and residential customers in the Strabane area. Gas will give industry a cleaner more attractive fuel choice and enhance business competitiveness – which is good for jobs. Households, when connected, will also enjoy a more convenient and cost effective energy option, countering fuel poverty.”

Mr Larkin added, “As well as the many customer advantages, natural gas replacing coal and oil improves the environment and assists in the mitigation of climate change. We look forward to the rest of the Gas to the West project being rolled out in the months and years ahead.” 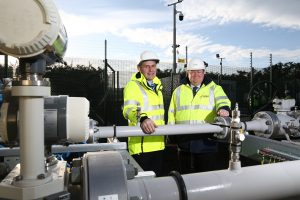