Introduction to our Gas Businesses

As a mutual company, all our activities are focused on the best interests of Northern Ireland’s energy consumers, and this publication is important in demonstrating the capability of the gas network to meet the ever growing needs of those consumers by providing an outlook for gas in Northern Ireland in the period ahead.

3. the North West Pipeline (NWP) – from Carrickfergus to Coolkeeragh, owned by GNI(UK) Limited Ireland; and

Premier Transmission Limited (PTL) is the owner and operator of the Scotland to Northern Ireland natural gas transmission pipeline (SNIP).

The full share capital of PTL was acquired from the 50/50 joint venture owners, BG Group plc and Keyspan Energy Development Corporation, on 18 March 2005 by Mutual Energy Ltd. Mutual Energy is a mutual company which manages energy assets in the long term interests of Northern Ireland’s energy consumers. Having no shareholders, any financial surpluses are for the benefit of energy consumers. This combined with long term secure finance has allowed the company to manage major energy assets at a very low cost to consumers.

The 24-inch diameter pipeline is 135 kilometres long and runs from Twynholm in Scotland to Ballylumford in Northern Ireland.

Constructed over a period of three years between 1994 and 1996, the pipeline was completed to schedule and within budget. The pipeline operates under an ‘open access’, non-discriminatory commercial framework.

It transports gas to Ballylumford Power Station which generates over half of Northern Ireland’s electricity needs and feeds the Greater Belfast natural gas distribution system via the Belfast Gas Transmission Pipeline.

The full share capital of Phoenix Natural Gas Limited, was acquired from Phoenix Energy Holding on 31 March 2008, the name has changed to BGTL.

BGTL, owns the Belfast Gas Transmission pipeline system, which consists of 26km’s of 600mm “cross country” pipeline connected to the SNIP pipeline at Ballylumford, above ground installations at Torytown, where pressure is reduced before exiting the system and Middle Division, where the North West Pipeline connects.

Constructed over a period of three years between 1995 and 1998, the pipeline was completed to schedule and within budget. The pipeline also operates under an ‘open access’, non-discriminatory commercial framework.

Following an open competitive process, Mutual Energy Limited and SGN were awarded licences by the Utility Regulator for Northern Ireland to build and operate the high pressure and low pressure gas pipelines which will extend the natural gas network into the west of Northern Ireland. This significant gas network extension will bring the very considerable benefits of natural gas to the towns of Coalisland, Cookstown, Derrylin, Dungannon, Enniskillen, Magherafelt, Omagh and Strabane in the immediate years ahead.

The first phase of the project saw the construction of a new gas pipeline to connect the Strabane area with the existing gas transmission network at Maydown, Derry/Londonderry, where a new pressure reduction station has been sited. The first industrial customer (LacPatrick at Artigarvan) has now been connected and the new distribution network continues to be rolled out in Strabane, with the first domestic customers now using gas in their homes.

With full planning permission having been secured in mid 2017, the main works contractor for Gas to the West (Murphy GMC and Roadbridge) has been appointed and the major construction phase of this £250 million infrastructure project got underway in October 2017 in counties Tyrone, Derry and Fermanagh.  Murphy GMC and Roadbridge will be responsible for the specialist engineering and construction of 200km of gas pipelines in the Cookstown, Coalisland, Derrylin, Dungannon, Enniskillen, Magherafelt and Omagh areas.  SGN Natural Gas is scheduled to deliver mains gas and meters to 40,000 customers over the next 40 years in eight main towns in the western area.  The investment in Gas to the West will support around 200 jobs during the construction phase and the new gas infrastructure is expected to sustain a significant number of ongoing jobs for installation sub-contractors and other related functions. 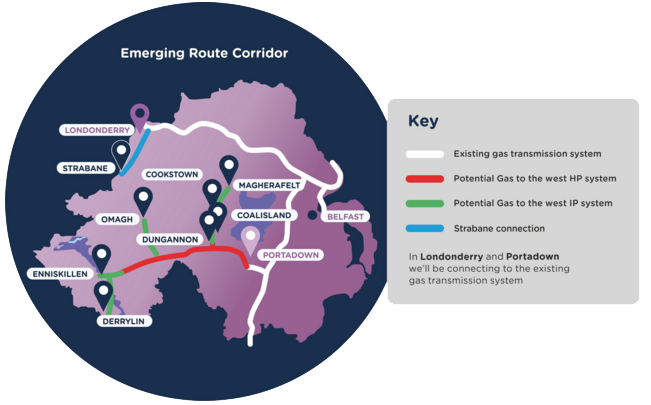